A new medical diagnostics start-up company spun out of Victoria University of Wellington is set to revolutionise the way medical professionals diagnose and monitor the health of their patients. 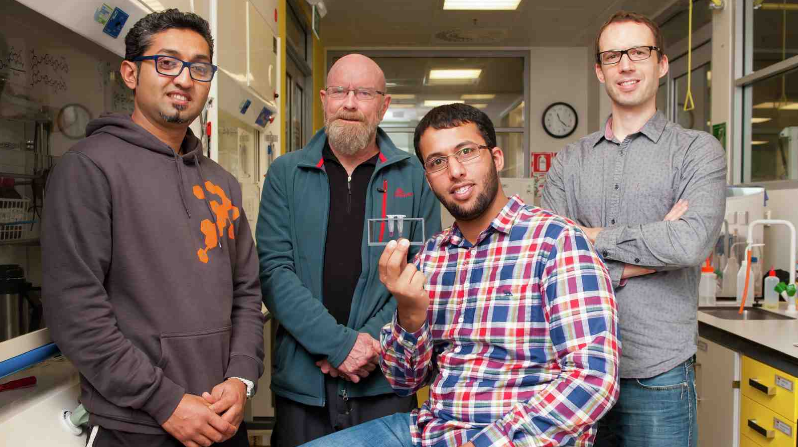 Currently many diagnostic tests rely on antibodies, which are used as probes to detect a targeted molecule. The common pregnancy test, for example, detects pregnancy when an antibody indicator binds to a glycoprotein (hCG), found in urine.

The company, AuramerBio, is developing a portfolio of sensing technologies that can be used in a range of medical and environmental contexts, but which use aptamers rather than antibodies.

Aptamers could be described as synthetic antibodies, single-stranded DNA or RNA molecules that can bind to pre-selected targets.

They are regarded as having many advantages over antibodies, including being able to bind to molecules a fraction of the size of proteins typically targeted by antibodies. Moreover, as they are made synthetically and are not animal-derived, they can be produced much more quickly and cheaply.

“Antibodies can take six to twelve months to develop,” says AuramerBio chief executive Jeremy Jones. “It takes less than a month for us to get to an equivalent point.”

Aptamers, he predicts, are poised to disrupt the $40 billion dollar antibody market.

“In some cases, our technology could completely eliminate the need to send samples away to an offsite lab for expensive testing. The impact could be enormous.”

Until recently, the use of aptamers in diagnostic testing has been limited because the bonds aptamers form with target molecules have been too weak for aptamers to be effective as indicators.

This is exactly what distinguishes AuramerBio from its competitors says Mr Jones—the development of a way to design aptamers that have an unusually strong binding capacity, so that the aptamers stick extremely well to small molecules.

“When you combine that with the sensor device we’re developing, that translates to being able to measure the target molecules at extremely low concentrations,” he says. “Stronger binding means your device is much more sensitive.”

AuramerBio will largely impact clinicians, doctors and their patients. For instance, the team has developed an aptamer to more accurately detect estradiol, an important female sex hormone which regulates female reproductive cycles.

Estradiol levels can be used to assess a number of conditions, but an effective diagnosis often depends on being able to measure it at lower levels than is currently possible.

“And the aptamer that we’ve been able to design to bind to estradiol is much better, at least a factor of ten better, of what anyone else has been able to achieve for that target molecule.”

“Currently you can’t tell the difference, and a clinician will then have to run a number of other tests to work out which one is it.”

This will also open the door to further research on the activity of estradiol, which is implicated in a range of biological and neurological conditions. “Which medicine doesn’t yet understand because we haven’t been able to measure it accurately at those lower levels.”

The research combined biology, in the design of synthetic antibodies, with engineering and surface chemistry, in the development of the electrochemical-sensing device.

As is often the case, the collaboration involved serendipitous encounters.

“Aptamers really captured my imagination from when I first learned about them, but a few chance meetings at the right time gave me the opportunity to actually pursue that interest,” says Dr Hodgkiss.

“Firstly, finding that a world-leading aptamer programme was already happening just down the corridor in Ken and Shalen's lab. And secondly, when prospective PhD student, Omar Alsager, approached me about research into biosensor technology. Once Omar and Shalen got together, things moved very quickly.”

Dr Kumar, co-founder of AuramerBio and the company’s chief technical officer says: “It’s great to be able to show that we can do amazing research in New Zealand that you don’t need to relocate offshore to create world-wide impact and build a successful career in science.”

AuramerBio was launched internationally in April at the Aptamers 2016, a symposium held in Oxford, United Kingdom, and which bought together researchers and industry interested in the therapeutic, diagnostic, analytical applications of aptamers.

“To succeed in building a business in New Zealand you need to be prepared to get on a plane a lot to make sure people in the global market know who you are,” says Mr Jones. “You need to get past the perceived tyranny of distance.”

“We got a lot of great interest from the attendees in terms of the science because we’re clearly at the forefront of science in this space. But people were also interested in finding out about this new company on the scene.”

“We were very confident that we had capability that was very special and unique, and better than everything else we had seen out there. But getting over there and face to face with potential customers and partners, and seeing them go ‘wow, what you’re doing is incredible’ was an amazing confirmation and validation.”