Peloruside is a natural product from a New Zealand marine sponge that has a similar mode of action to the anticancer drugs Taxol®, Taxotere®, Jevtana®, and Ixempra® but shows improved preclinical effectiveness and is better tolerated in mouse models of lung and breast cancer.  Peloruside causes stabilisation of microtubules in cells but binds to a different site on the microtubule to the clinically used anticancer drugs.  We recently published the mouse xenograft results on peloruside in the journal Molecular Cancer Therapeutics. 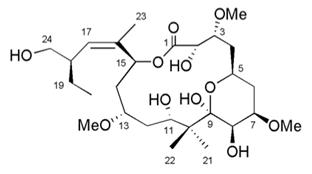 Our two main aims at this stage of the project are to determine how peloruside is handled and metabolised by the body, and to develop a scheme to produce clinically relevant amounts of peloruside, either by up-scaling its chemical synthesis or developing an aquaculture approach.  A new avenue of patent protection is also being investigated.  We are collaborating with Professors Richard Furneaux and Peter Tyler of the Ferrier Institute at Victoria University of Wellington and Dr Stephen Jamieson of the Auckland Cancer Society Research Centre to achieve these aims.

With regard to other natural products under investigation, we have nearly completed our study on the microtubule-stabilising agent from avocados, persin, in conjunction with Darby Brooke of the Cawthron Institute.  Our last experiment will be to determine if persin binds to the same site on its β-tubulin target as the taxanes and epothilones.

We will use a fluorescent Taxol analogue (Flutax) to test whether persin is able to compete for binding with Flutax in cultured cells.  We used this same method with another stabilising agent, zampanolide, and showed that it could compete with Flutax, displacing it from the microtubules, thus confirming that it binds to the same site as the taxanes.

Experiments to confirm the mode of action of hamigeran G on Golgi secretory function and vesicular trafficking has momentarily been suspended while we wait for a new student to take the project on.  The previous student has accepted a position outside of Victoria University and is no longer associated with the project.  Hamigeran G is the most active of the hamigeran analogues in our possession. 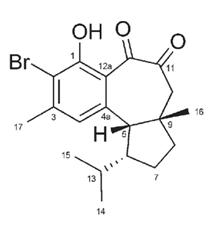