A world-first study into the health and wellbeing of more than 154 million Indigenous and tribal peoples globally was launched today simultaneously in Melbourne and London, by Australia’s Lowitja Institute and the Lancet journal. 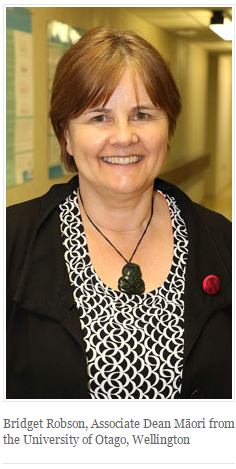 Bridget Robson, Associate Dean Māori from the University of Otago, Wellington, was one of the authors and provides a New Zealand perspective.

The indicators cover health, education and low economic status and the study focuses on differences between Indigenous and non-indigenous populations within the countries, rather than trying to compare between countries.

“Although this study was unable to report trends over time, some equity indicators for Māori are improving in New Zealand. These include infant mortality, life expectancy at birth, and education attainment,” says Ms Robson.

“New Zealand has developed high quality ethnicity data in its national health surveillance system over the past two decades, crucial for monitoring the right to health for Māori and Treaty of Waitangi obligations.

“This must be vigilantly maintained. The next steps include developing data systems that support iwi and hapū to monitor health and social outcomes for their own people and rohe, incorporating Māori values and concepts of health and wellbeing,” she says.

Ms Robson notes the following points about the study:

The report also makes specific recommendations for strengthening health systems to meet the unique needs of these communities. The report says that closing the economic, societal and health gaps for Indigenous people starts with increasing visibility, implementing targeted programmes and promoting self-determination. The comprehensive report has been a major two-year undertaking. It contains data from 154 million Indigenous people in 23 countries around the world. This represents 50% of the global Indigenous population.