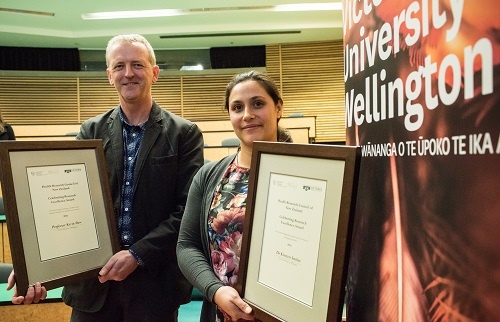 Two Victoria University of Wellington researchers have been recognised by the Health Research Council of New Zealand (HRC) for their work into understanding social issues of health and wellbeing.

Professor Kevin Dew and Dr Kirsten Smiler were honoured at a ceremony last night, which celebrated research excellence at Victoria University and 25 years of work by the HRC.

Professor Dew from Victoria’s School of Social and Cultural Studies was acknowledged for his outstanding contribution as an established researcher.

His 21-year research career has focused on understanding the sociology of health and illness in New Zealand, and inequalities in the healthcare system—including inequalities in cancer survival between Māori and non-Māori.

“Our research suggests assessments were not standardised and there were differences in how cases were treated. Treatment could draw on typical ways in which we categorise people and therefore has implications for health inequalities.”

“Some Māori patients did not take on the passive patient role like many other patients, but were much more active. There were difficulties bridging Māori understandings and ways of being in the world with mainstream medicine.

“The research suggests that rather than overt discrimination being an issue, we should attend to the many small influences that can lead to inequalities in cancer care. This includes how health practitioners categorise people and a potential clash of understandings in relation to the roles that people take on when they enter the hospital system.”

Professor Dew has been involved with 12 HRC-funded studies since 2002, including projects that looked at workers’ responses to illness and injury in the workplace, and understanding of the ways in which people think of and use medications in their daily lives.

“HRC funding has supported the establishment of research teams, which bring together people with different skillsets, perspectives and connections to communities, practitioners and services,” says Professor Dew. “I would not be involved in such fascinating research without HRC funding.”

Dr Kirsten Smiler from Victoria’s School of Government was also honoured by the HRC for her outstanding contribution as an emerging researcher.

Dr Smiler’s research has been dedicated to examining the social and linguistic experiences of Māori deaf people and how knowledge of this would provide a foundation for improvements in services and supports. Māori are disproportionately represented in hearing-loss statistics. Understanding the impacts of this as well as how services can be more responsive to supporting whānau is important.

Ms Smiler’s HRC-funded PhD research investigated the experiences and expectations of Māori children and their whānau during the intervention process.

Dr Smiler is continuing this research—funded by a HRC Erihapeti Rehu-Murchie Postdoctoral Scholarship—in her role as a postdoctoral researcher in Victoria’s Health Services Research Centre.

“Support services for Māori Deaf and their whānau are often unaware that they exist at the intersection of languages and cultures, all of which have differing profiles, roles and status in New Zealand. My research has worked toward providing a better understanding of these complexities, and recommends that Māori and Deaf knowledge inform how services and professionals respond,” says Dr Smiler.

“This work is an acknowledgement of the importance of whānau, language, and culture on our overall health and wellbeing. I feel extremely privileged to have been able to do this work.”

+ Text Size -
Do NOT follow this link or you will be banned from the site! Original generation time 0.9171 seconds.