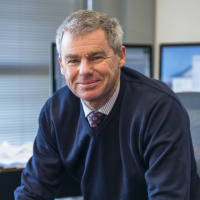 Distinguished bio-medical science leader and Director of the Malaghan Institute of Medical Research was elected to the Research For Life (RFL) board at the RFL Annual General Meeting held earlier this week.

Research For Life’s Chairman Dr Lance Lawler said, “We are honoured that such a distinguished leader in bio-medical science as Graham has agreed to join our governance board.”

Professor Graham Le Gros was appointed Director (Chief Executive) of the Malaghan Institute in 1994, following a three-year Fogarty Fellowship at the National Institutes of Health, Washington DC, and a five-year scientist position with Ciba-Geigy in Basel, Switzerland.

In 2014 he was awarded an Honorary Fellowship from The Royal College of Pathologists of Australasia (RCPA) and was made a Companion of the New Zealand Order of Merit. In 2016 he received the Sir Geoffrey Peren Award, the Distinguished Alumni Award 2016 by Massey University. In 2017 Professor Le Gros was named a Paul Harris Fellow by the Rotary Foundation of Rotary International in appreciation of tangible and significant assistance given for the furtherance of better understanding and friendly relations among peoples of the world.

In 2021, he was named a KEA World Class New Zealander for a life dedicated to improving the health of others through understanding and harnessing the power of the immune system.

Established in 1960, Research For Life funds innovative quality research undertaken by researchers in the early stages of their careers.

Medical researchers from the University of Otago, Wellington - School of Medicine and Health Science, Victoria University of Wellington, ESR, Capital & Coast District Health Board, Massey University College of Health and the Malaghan Institute of Medical Research have, in the recent past, received grants from Research For Life.

“Research For Life has funded research into cancer, cardiovascular disease, kidney disease, diabetes and obesity, multiple sclerosis, stroke therapy and conditions of particular concern in the Wellington region, such as asthma. This research, supported by Research For Life, is vital to achieving continuing improvements in health outcomes in the community,” Lance Lawler said.