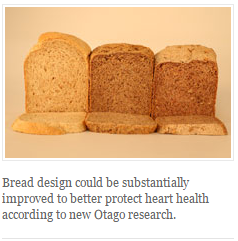 Bread design could be substantially improved to better protect heart health according to new research. A team at the University of Otago, Wellington studied bread design from the perspective of reducing risk of heart disease, while keeping ingredient costs down.

Lead author Professor Nick Wilson said that bread is a staple of the New Zealand diet and so it is a high priority food to research when improving options for people to reduce diet-related disease risks.

“Bread can be a way to increase dietary intake of fibre and healthy seeds such as flaxseed/linseed. The problem of most breads being high in salt can also be addressed by reducing the amount of sodium-based salts and increasing the amount of healthier potassium-based salts. Potassium is particularly good for heart health,” Professor Wilson says.

The new study just published in the international journal BMC Nutrition, used a computer-based method called linear programming. This allowed the researchers to get the best mix of healthy ingredients into the bread designs for the lowest prices. They made comparisons with commercial white breads available in 15 OECD countries, including New Zealand. Comparisons were also made with high-seed breads in six of these countries.

The research found that the optimised loaf costing NZ $1.50 in ingredients was superior to the commercial white loaves in such categories as having lower sodium and high potassium. The more expensive bread costing $3 in ingredients was also nutritionally superior to the commercial loaves with seeds in terms of lower sodium, higher potassium, higher dietary fibre, and the best polyunsaturated fatty acid to saturated fatty acid ratio. It was this version of the bread that included a moderate amount of added linseed and also some walnut.

“Dietary risk factors are particularly important for non-communicable diseases such as cardiovascular disease, diabetes and cancer. New Zealand could do more to prevent these by making improvements to the food environment — and one of them is providing the option of low-cost healthier breads,” says Professor Wilson.

The authors suggest that such bread designs could be promoted by health agencies and provided in workplace cafeterias and public hospitals. They could even be part of a government-funded “heart healthy bread” voucher system to prevent further heart attacks and strokes in people with cardiovascular disease.

But Professor Wilson noted that “while we liked the taste of these optimised breads which we made in home bread-making machines, further taste testing with the public would be required to ensure adequate levels of public acceptability.”

“But we do know that some bread on the New Zealand market already has some of the desirable features such as extra seeds — even if they still have problems such as high sodium levels.”

Additional comments on this study are at the “Public Health Expert” blog.

The study was funded by the Health Research Council as part of funding for the BODE3 Programme with includes studying the cost-effectiveness of preventive interventions to achieve health gain and lower health system costs.

+ Text Size -
Do NOT follow this link or you will be banned from the site! Original generation time 9.9527 seconds. Cache Loaded in: 0.0183 seconds.