There is strong evidence indicating that the immune system has a considerable impact on the appearance, progression and control of tumours. Early in the development of cancer the immune response may be sufficient to completely eradicate tumour cells before they become clinically detectable.  At later stages of disease, the presence of an immune infiltrate is a positive prognostic factor associated with slower clinical progression of colon and ovarian cancers.

We have used peri-tumoural administration of various forms of adjuvants to induce the activation of intra-tumoural dendritic cells, and anti-tumour immune responses.  We found that many of the adjuvants we used were effective at inducing the activation of dendritic cells in the tumour-draining lymph node, however, only some of these adjuvants were also able to induce retardation of tumour growth (Figure 1).  The Toll-like receptor 3 (TLR3) ligand Poly I:C was effective, while monosodium urate crystals (MSU) and Mycobacterium smegmatis bacteria only showed an effect when given together.  Treatment with the TLR4 ligand lipopolysaccharide (LPS) or with Mycobacterium bovis BCG (not shown), failed to show an effect on tumour size.  Similar results were also obtained using a mammary adenocarcinoma tumour model that spontaneously metastasizes to the lung.  This model enabled us to establish that adjuvant treatment at the primary tumour site could also reduce metastasis formation in the lung.

Further experiments investigated the underlying mechanisms that determine the effectiveness of adjuvants.  Real-time PCR arrays were used to examine mRNA levels for 84 cytokines, chemokines and inflammatory mediators in tumours treated with the different adjuvants listed above. The results obtained (not shown) revealed that treatment with LPS, Msmeg+MSU and PolyI:C variably induced the transcription of a number of inflammatory mediators including IL12p40, IL-6, TNF-α, G-CSF and GM-CSF. In addition, LPS treatment also induced transcription of the anti-inflammatory cytokine IL-10. The results of these experiments were confirmed by measuring the levels of two relevant cytokines, IL-12p70 and IL-10, in the serum of treated mice, as shown in Figure 2.

We conclude that effective adjuvants induce a unique cytokine profile which supports the differentiation of T cells to an anti-tumour effector phenotype. 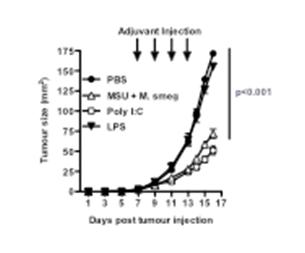 Figure 1: Groups of 5 mice were injected with B16 melanoma subcutaneously, and treated peri-tumourally with the indicated adjuvants Poly I:C, LPS, Mycobacterium smegmatis (M smeg) and MSU on days 7, 9, 11 and 13. Tumour sizes were calculated by measuring perpendicular tumour diameters using callipers. P refers to the PBS group vs. the MSU+Msmeg or PolyI:C-treated groups.

Figure 2: Mice were treated peri-tumourally with the indicated adjuvants, and bled at 1, 3 and 24h after adjuvant administration. Cytokine levels were measured using a multiplex cytokine bead assay. ND, not detected.