Affymetrix miRNA 2.0 arrays were run on total miRNA extracted from abdominal and omental fat samples taken form 15 obese patients at the time of their initial Roux-en Y gastric bypass surgery and at a second operation approximately 1 year later.  The resultant CEL files were read and analysed by BRB Array tools, an array analysis suite developed by the Biometrics research Branch of the National Cancer Institute in the US.  The data was Quantile normalised and log transformed then comparisons were made between abdominal fat op1 vs op2, omental fat op1 vs op2, abdominal fat vs omental fat at op1 and omental fat vs abdominal fat at op2.  Predictive analysis of microarrays (PAM), Statistical analysis of microarrays (SAM), Class comparisons of microarrays and analysis of variance were conducted for each comparison.   The top hits which were significantly different between operation 1 and operation 2 as well as those between fat types at operation 1 and at operation 2 were identified and 6 were selected for confirmatory qRTPCR.   microRNA was extracted from fat from the initial 15 patients and converted to cDNA with a TaqMan microRNA Reverse Transcription kit (Applied Biosystems) and analysed with an Applied Biosystems 7300 real time machine using Gene Expression Mastermix (Applied Biosystems).  Initial results from these assays suggested that at least one miRNA was specific to patients with diabetes.  As the initial cohort contained 3 diabetics, 7 insulin resistant and  5 insulin sensitive patients, microRNA from an additional 5 diabetic and 3 insulin sensitive set of abdominal and omental fat were extracted, converted to cDNA and  included in the qRTPCR confirmation.   Results for hsa-mir-223 which was differentially expressed in diabetic patients are summarised in the following figures: 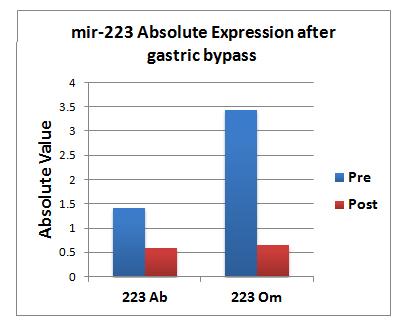 Figure 1:  Overall changes in absolute expression of hsa-mir-223 in abdominal fat vs omental fat before and after significant weight loss. 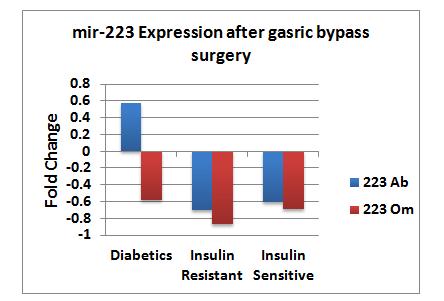 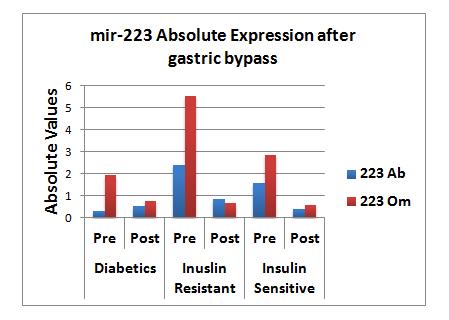 Figure 3: Comparison of absolute relative concentration (relative to control miRNA (2-∆CT)) of hsa-mir-223 in omental fat and abdominal fat according to phenotype. Note that the expression level of hsa-mir-223 was relatively low in abdominal fat for both pre and post diabetes and weight loss but the level increased while in all other groups it decreased.

Four other microRNA species have been identified and the study has been extended by examining the level of these 5 species in pre and 6 day post RYGB surgery plasma from the subjects involved in this study.   A Paper is in preparation based on these results.   Special thanks to Angela Jones who has done the qRTPCR work and Alice Johnston for the original extraction of total RNA from the fats which were sent to the States. Special thanks to Professor Eric Hoffman and Svetlana Ghimbovschi at the National Children’s Research Center in Washington for isolating the micro RNA and running the arrays.

Illumina Human HT12 V4 arrays were run on total RNA extracted from abdominal and omental fat samples from 15 obese patients at the time of their initial Roux-en Y gastric bypass surgery and at a second operation approximately one year later.  These represent 3 diabetic, 5 insulin sensitive and 7 insulin resistant patients.  After the experience of the previous experiment where a diabetes effect was nearly masked by the low number of diabetic patients in the study, we have sent a further 32 fat samples to the US for array analysis consisting of abdominal and omental fat at operation 1 and 2 for 5 diabetic and 3 insulin sensitive patients.  The final study will thus have 8 diabetics, 8 insulin sensitive and 7 insulin resistant subjects for phenotype comparison.   We have decided to await final analysis of the arrays and the subsequent qRTPCR till the extra array results are completed.