Initial Objectives:  New Zealand has one of the highest rates of melanoma in the world and melanoma is the fourth most common registered malignancy in New Zealanders.  Our preliminary data shows that within New Zealand metastatic melanoma has significantly different frequencies of driver mutations compared with Australia, USA and Europe.  This is particularly important in the clinical context of targeted therapy, where tyrosine kinase inhibitor drugs (TKIs) have been designed to specifically target the common mutations of the BRAF oncogene (V600E and V600K).  As more mutations are discovered, it is important to identify how they respond to available treatment as ultimately this could lead to the expansion of therapeutic options available to melanoma patients who are currently not eligible for targeted therapy.  We have identified a novel BRAF mutation in the metastatic melanoma of a New Zealand patient.  We aim to identify if this mutation is activating and whether it is responsive to currently available TKIs.

Vemurafenib and the MEK inhibitor trametinib are FDA approved treatments for patients with BRAF V600E or V600K positive metastatic melanomas.  Clinical trials have shown that patients administered these drugs have increased progression free survival and improved overall survival.  Since the initial trials were performed the sensitivity and specificity of mutation detection methodology has greatly improved and as a consequence scientists have discovered a number of additional BRAF mutations at and surrounding codon 600.  Our novel mutation is located at amino acid position 597 of the BRAF gene, which lies within the activation segment of the kinase domain and is adjacent to codon 600.  A number of recent studies have shown that when patients with a 597 mutation are treated with trametinib there is a reduction in the hyper activity of the MAP Kinase pathway coupled with an increase in overall survival rate.

To investigate the responsiveness of our mutation to treatment with kinase inhibitors we proposed to;

i) overexpress our mutation in the human cell line 293H,ii) treat the transfected cells with vemurafenib and/or trametinib and

The first stage of this project was to construct a plasmid containing either our mutation of interest, the common V600E mutation or a wildtype BRAF gene.  Vector construction for gene overexpression is a well-known principal and uses standard cloning methods.  From previous experience we decided to use the vector pcDNA3.1 as it contains multiple cloning sites and is designed for high-level constitutive expression in a variety of mammalian cells. (Figure 1) 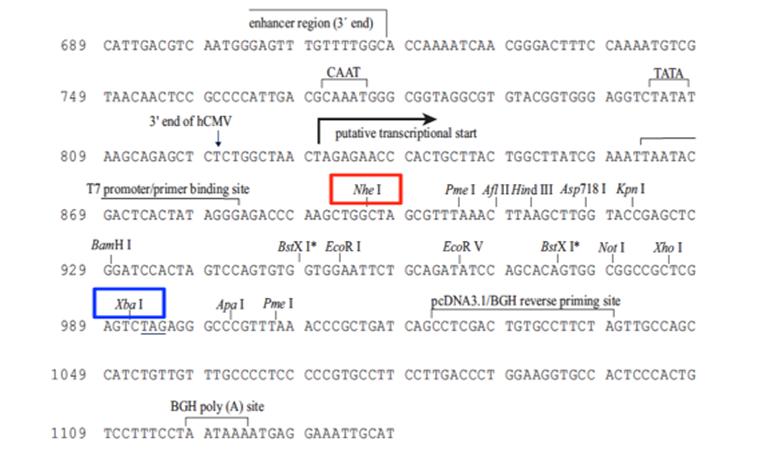 Nhe1 will be attached to the forward primer and Xba1 to the reverse primer.

For the initial period of the project a cloning strategy was designed and primers ordered with the appropriate restriction enzymes attached.  Even though the Molecular Diagnostic Department is a transitional facility it does not hold a license to perform work with genetically modified organisms (GMOs).  To avoid this problem it was decided to carry out all cloning experiments at the Department of Pathology and Molecular Medicine.  However it transpires that the University of Otago GMO license does not extend to the School of Medicine, Wellington.  Consequently for the last few months a large proportion of the project time has been allocated to administration not lab work.  If a resolution is not achieved in the near future an alternative option will be found.  Origene is a company that can clone, isolate and verify the designed plasmid and then ship the DNA to the client ready for transfection.  This is not the preferred option but it will avoid the need for a GMO license.  With regards to the tyrosine inhibitors we have sourced vemurafenib locally (a gift from our local oncologist) and will purchase the MEK inhibitor trametinib.  In addition we have sourced the 293H cell line from a commercial supplier (Life Technologies) in order to start the cell line aspect of the project.

To detect changes in cell signalling molecules downstream from BRAF we propose to use standard western blot techniques.  The protocol for protein extraction from cells has been optimized in our hands and we have sourced antibodies for BRAF, MEK and phosphorylated MEK from Santa Cruz and Cell Signaling Technologies. The next step is to determine the optimum working concentrations for these antibodies.

In conclusion the first seven months of this project has mainly been devoted to strategy design and unforeseen administrative tasks, hence no funds have been requested to-date.  Even with these unexpected delays the completion of this project is still achievable within the 18-month time frame suggested and good progress has been made to overcome the obstacles encountered.