Bart A Ellenbroek
School of Psychology

Background:  The aim of the project was to gain insight into the role of the dopamine D1 receptor in social behaviour.  Studies using pharmacological manipulations had already indicated that this receptor may have an influence on social interaction, but these tools are notoriously unselective.  All dopamine D1 agonists and antagonists also influence the dopamine D5 receptor and several also influence serotonin receptors.  Moreover, virtually all social interaction studies had been analysed by standard behavioural analyses.

In this research project we used a new approach to investigate the role of D1 receptors in social behaviour.  We used of rats with a selective mutation in the dopamine D1 receptors therefore circumventing the problem of the lack of selectivity.  In addition, we used several different methods of analysis, including visual observation, computer-assisted imaging and analysis of ultrasonic vocalisations.  Moreover, we used three different protocols to measure sociability in rats: [1] social interaction; [2] social approach attention behaviour and [3] social motivation.

Results:  As the methods were described in detail in the original project proposal, we will not elaborate on them here, as space is limited.

In order to be able to use our video-tracking software (Ethovision) to detect multiple animals within the same enclosure, the SIM was obtained with the grant from the Wellington Medical Research Foundation. As our software already can detect nose, body and tail-base of an animal, we can now distinguish nose-nose and nose-tail interactions (crucial for social behaviour), provided each animal has its own colour. The first set of experiments was designed to optimize the experimental conditions in terms of finding the best contrasting colours and optimal lighting conditions.

Figure 1 shows the results of the optimising process. Using green and red face paint, the SIM reliably detected two rats within one arena, even when the animals crawled over each other.  The right hand figure, in addition, shows a very high correlation between nose-tail detection scored manually (x-axis) and identified using the SIM. Similarly high correlations were found in nose-nose detection. 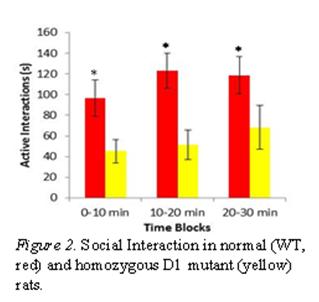 The second set of experiments was aimed to investigate potential social interaction deficits in D1 mutant animals. 10 Pairs of animals from the same genotype but different litters were placed together in an open field and social interactions were measured using visual observation and the SIM. The results, depicted in fig 2 show that, as predicted D1 mutant rats have a significantly reduced active social interaction throughout the entire 30 minute session.  No difference was found in passive social behaviour or in ultrasonic vocalisations (USVs).  This latter was surprising, but may have been due to the fact that the novel improved software was not yet available to reliably measure USVs.  This software is now available in beta version (with the commercial version to be released soon) and we will repeat this experiment in the near future. Importantly, the SIM analysis of the social behaviour confirmed our manual analysis showing a significant reduction in nose-nose and nose-tail interactions in D1 mutant animals.

Dissemination of results:  Some of the results of the project have already been discussed in a plenary lecture I was invited to give at the 14th ENP Meeting in Lunteren, the Netherlands (May 2014). In addition, we are currently preparing a manuscript in which the data on social interaction will be included. This manuscript is expected to be complete in a few months as we are currently awaiting some additional data.In addition, we investigated social approach attention and social motivation in D1 mutant and control rats. In the social approach attention, there was a strong tendency for the D1 animals to spent less time investigating the new animal, although this effect just missed statistical significance. We are currently working on a slightly modified paradigm which hopefully leads to more robust differences. In the social motivation paradigm we did not find any difference between the genotypes. However this may be due to methodological issues as even the normal (WT) rats did not show a clear increase in place preference

Overall conclusions:  Overall, the project can be considered very successful. We have been able to optimize the SIM, which will allows us to much more objectively analyse social behaviour. In addition, we found a significant reduction in social behaviour in D1 mutant rats. If this can be replicated in additional paradigms, it would suggest that drugs that stimulate the D1 receptors may be of value in the treatment of patients with deficits in sociability, such as patients with schizophrenia and autism.

I am therefore very grateful to the foundation for their support for our research.