AM Cameron and MV Berridge

Over the past eight months good progress has been made determining the immunological effects of the highly targeted mutant-BRAF inhibitors PLX4720 and Vemurafenib.  We have assessed immune effects in several in vitro and in vivo models, and have characterized a BRAFV600E melanoma model allowing us to begin to investigate combination therapy approaches. Specific research outcomes are detailed below:

Aim 1:  To elucidate the mechanism of Vemurafenib and PLX4720 inhibition of immune responses in vitro and establish protective factors in vivo

Furthermore, we have demonstrated that when T cells are subjected to a strong stimulus, both in vitro and in vivo, there is minimal or inhibitory drug effects.  However, when T cells are subjected to sub-optimal stimulus in vitro and in vivo, both PLX4720 and Vemurafenib treatment can increase T cell proliferation.  Indicating that the level of immune stimulation determines the effects of BRAF inhibition on T cells. 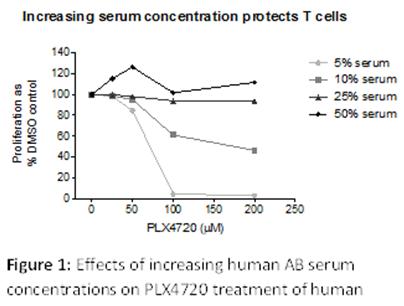 Aim 2:  To determine the effects of BRAF inhibition on melanoma immunosuppression in vitro

We are currently determining the immunosuppressive effects of BrafV600ECdkn2a-/- YUMM1.1 and YUMM1.7 melanoma cell lines received from Marcus Bosenberg at Yale University.  Preliminary data indicate that these cells do have a suppressive fucntion, and work is being progressed to determine the effects on T cell proliferation and regulatory cell induction.  We will then determine whether BRAF inhibitor treatment can impact this immunosuppression.

Aim 3:  To determine the effects of mutant BRAFV600 inhibitors on anti-tumour immune responses

We have investigated the effects of PLX4720 on anti-tumour vaccine in the BRAF wild-type (BRAFWT) B16.OVA model, using a vaccine comprised of 200µg OVA and 200ng α-galactosylceramide (αGalCer).  In this model we found there were no effects of BRAF inhibitor treatment on vaccine efficacy, however, PLX4720 directly affected the tumour growth rate (Figure 2).  Mice that were treated with PLX4720 as a single therapy had dramatically increased tumour growth, and ultimately decreased survival.  We have also established this effect can be replicated in vitro and are currently investigating the mechanism of action.  We hypothesize that in BRAFWT tumours mutant BRAFV600 targeted inhibitors cause over-activation of the MAP kinase pathway, increasing proliferation.

Aim 4:  To determine whether vaccination and immunomodulation can complement the anti-tumour effects of mutant BRAFV600-targeted drugs in V600E-positive melanoma

We have determined the tumour growth characteristics and PLX4720 sensitivity of the BRAFV600E YUMM1.1 and YUMM1.7 melanoma cell lines in C57Bl/6 mice. Additionally, we have established a vaccination protocol using a whole irradiated tumour cell vaccine, loaded with αGalCer.  When delivered prophylactically this vaccine significantly reduced tumour growth and increased survival.  Benefits are less significant with therapeutic vaccination (five days post-tumour challenge) but slower tumour growth and increased survival are still achieved.  We have begun initial experiments investigating combination of PLX4720 and therapeutic vaccine in the YUMM1.1 tumour model.  Preliminary experiment have been carried out with mice treated with therapeutic vaccination on day five post-tumour challenge, and then daily 20mg/kg PLX4720 treatment from day seven.  In this setting combination vaccine and PLX4720 treatment did not achieve synergistic effects.  However, further combination approaches with varying drug doses and changes to treatment schedule need to be investigated.