Chronic pain, post-operative pain and pain resulting from cancer and arthritis negatively impact on the quality of life for pain sufferers and are a major economic burden to New Zealand.  Particularly with New Zealand’s ageing population.  Approximately 16% of New Zealanders currently suffer from chronic pain which is poorly treated with current medications.  Drugs activating the mu-opioid receptor such as morphine and fentanyl, while effective at treating acute pain, become less effective over time and require higher doses to be administered to be effective (tolerance), cause constipation, respiratory depression and are addictive.  Chronic use can also potentiate pain.  Therefore, more effective anti-pain pharmacotherapies with reduced side effects and lower abuse potential would be of enormous benefit to millions of people worldwide.

Because DHEA is a bioactive lipid, it was expected to act via cannabinoid receptor activation.  To investigate the mechanism underlying both the analgesic and anti-inflammatory effects of DHEA we pre-treated a group of mice with either the cannabinoid 1 receptor (CB1) antagonist AM251 or CB2 antagonist AM630 followed by DHEA (2 mg/kg/i.p.) and evaluated behavioural responses in the formalin-induced inflammation model.  There was no significant change in the behavioural pain scores in either phase 1, nociceptive pain, or phase 2, inflammatory pain, with either cannabinoid antagonist.  Measures of oedema (footpad swelling) also showed no significant reduction in inflammation following either CB1 or CB2 antagonist administration compared to formalin/vehicle treated controls.  Combined, this data suggests that the analgesic and anti-inflammatory effects of DHEA are not mediated via activation of cannabinoid receptors.  The exact mechanism of action remains to be determined.

The warm-water tail withdrawal assay activates a thermal nociceptive response mediated by neurones in the central nervous system (CNS).  DHEA (2 mg/kg) showed no change in withdrawal latency compared to vehicle treated controls suggesting that DHEA is not centrally active.  Therefore, additional evaluation of CNS penetrance of DHEA was undertaken.  Mice were administered C13 labelled DHEA (2 mg/kg, i.p) or vehicle and brain tissue was taken following sacrificed at either 10 or 30 min.  Liquid chromatography mass spectroscopy analysis revealed C13 labelled DHEA was present in the brain at both 10 and 30 min (at low ng/ml levels).  Full quantification experiments are ongoing (n=2 per group).  This suggests the DHEA’s lack of effect in the CNS is not due to its inability to cross the blood-brain barrier, or to rapid inactivation but likely due to its specific modulation of inflammatory pain rather than nociceptive pain.

We can conclude that DHEA at a dose of 2 mg/k is effective in attenuating acute inflammatory pain in the mouse.  This anti-inflammatory effect is confirmed by reduced footpad oedema and reduced neutrophil infiltration into the footpad tissue.  In addition, DHEA showed no sedative effects.  The mechanism of how DHEA exerts its anti-inflammatory effects are unknown, but it is not due to modulation of either CB1 or CB2 receptors, as antagonist administration failed to attenuate the effects of DHEA.  Bioactive lipids, such as DHEA hold promise for the development of therapeutics to treat inflammation and inflammatory pain, particularly as it is effective following both systemic and local administration and is devoid of sedative effects. 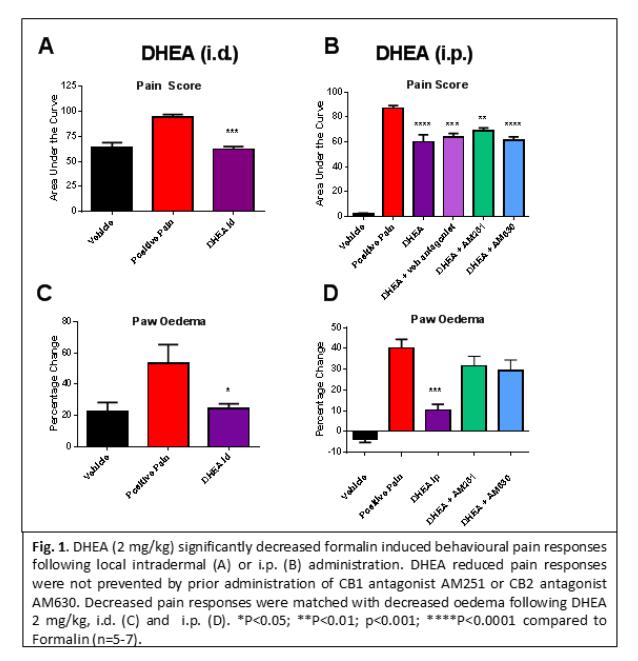