Method:  Subjects with T1DM and frequent hypoglycaemia were enrolled.  Treatment for each hypoglycaemia episode, defined as capillary glucose <4.0 mmol/l associated  with symptoms, was randomly assigned one of three protocols:  0.2 and 0.3 grams of glucose per kilogram of body weight or control treatment (international recommendation of 15 grams of glucose).  Each subject served as their own control and received each treatment in random order for up to 15 hypoglycaemia episodes. Glucose was re-tested 10 minutes after treatment, with a repeat dose if below 4 mmol/L.

Result:  Thirty four subjects (21 male) aged 22 – 71, mean BMI 25.2kg/m2 and HBA1c 63mmol/mol were recruited from C&CDHB diabetes outpatient clinics. A total of 418 documented episodes were analysed.  Twenty four subjects completed all 15 treatment episodes, while 10 had fewer than the compete number of events.  Two withdrew because they did not like the taste of the orange flavoured Dextro tablets, one was excluded (protocol violation).  One hundred and one episodes required two treatments and 18 required three to resolve the event.  The mean first blood glucose self-measurement (which determined if treatment was necessary) was 3.19 mmol/L. Eighty one percent of those requiring a second retreatment had a first blood glucose below 3.2 mmol/L.  Figure 1 and table 1 show that blood glucose was significantly higher at 10 minutes when 0.3 g/kg glucose was provided than with either 0.2 g/kg or 15 g.  The 0.3 g/kg was more effective than the other two doses in raising blood glucose levels men, but there was no difference between the three groups in women. 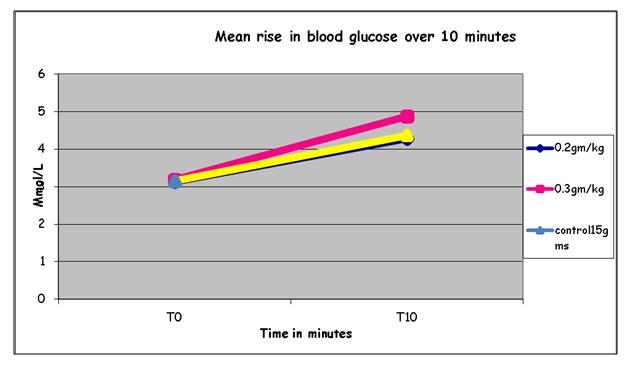 + Text Size -
Do NOT follow this link or you will be banned from the site! Original generation time 1.3374 seconds.