We have continued our studies on microtubule-stabilising agents, a class of drug that is exceptionally beneficial in the treatment of cancer.  The first order anticancer drugs used for solid tumours of the breast, lung, and ovary, paclitaxel, docetaxel, and ixabepilone, continue to be used clinically, despite serious side effects that detract from their clinical profile.  Second generation microtubule-stabilising agents present a possible alternative to these front line drugs, and these newer agents being developed at Victoria University of Wellington by the Centre for Biodiscovery include peloruside A, laulimalide, and zampanolide.  Work on zampanolide has been particularly interesting given the covalent nature of its binding to its microtubule target in cancer 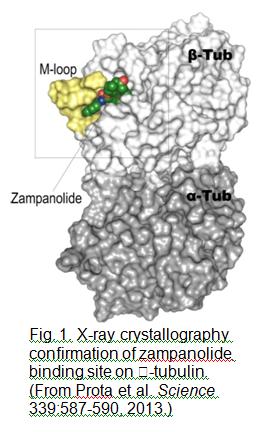 cells. Work on zampanolide has led to two significant papers, one on its covalent mode of binding and the other, in Science, on the X-ray crystallography structure of zampanolide bound to the tubulin dimer, confirming its binding site to be the same as paclitaxel and ixabepilone (see Fig. 1).  The Science paper also demonstrated the role of the M-loop of tubulin on the stabilisation process.

In addition to the characterisation of zampanolide, studies have continued on the role of mutations in the tubulin gene on the development of resistance to microtubule-stabilising agents by cancer cells, concentrating on peloruside A and laulimalide.  We have recently published our findings demonstrating that some of the resistance to the compounds can be rescued by transfection of wild type tubulin into the cells.  Our data have provided the first direct evidence for a functional role of binding-site mutations in the acquired resistance of cancer cells to peloruside and laulimalide and other clinically used drugs as well.

Another new natural product from the leaves of the avocado tree that we have been working on in association with Dr Darby Brooke of the Auckland Cancer Society Research Centre is persin.  Persin, like peloruside and paclitaxel, stabilises microtubules.  Our specific interest at this time is to determine it’s binding site on tubulin to see if it binds to a unique site or to one of the other two known sites – either the taxoid site where paclitaxel binds, or the laulimalide/peloruside site.

Research is also continuing on a more detailed understanding of the mode of action of microtubule-stabilising agents, with the aim of improving the therapeutic efficiency of this important class of compounds in the clinic.

Another new natural product from a marine sponge, hamigeran G, with antiproliferative activity against mammalian cells and yeast, has been isolated that appears to have a novel mode of action.  Using chemical genomic screens in yeast, we have shown that hamigeran G may be targeting Golgi vesicular transport in cells.  It remains to verify this mode of action in cultured human cancer cell lines.  We are working in collaboration with Professor Phil Thomas at the University of Texas Southwestern Medical School in Dallas to confirm this action.  Professor Thomas has been studying inhibitors of Golgi function for many years.  Victoria University has taken out a provisional patent on hamigeran G, and further studies to characterise its molecular target are warranted.