Stroke is a costly disease from human, societal, and economic perspectives.  In New Zealand it is the third leading cause of death and the leading source of adult disability with an incidence rate that is rising.  New approaches to stroke management are urgently required.

Recently a strategy has been suggested based on the concept of stabilising blood pressure through collateral blood vessels that supply the penumbra (a zone of reversible cerebral injury).  Although average blood pressure is frequently manipulated to reach target ranges, this belies the fact that it is often very dynamic during acute stroke.  Such blood pressure variability (BPV) may increase the risk of secondary complications such as haemorrhagic transformation.  Therefore, in a rat model of acute ischaemic stroke we sought to investigate the nature of BPV as a potential target for pharmacological attenuation.  We hypothesised that stroke would be associated with an increase in BPV. 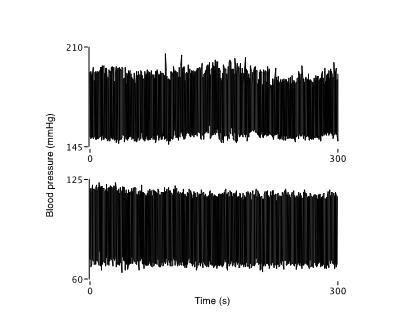 Fig. 1.  Example of a 5 minute carotid blood pressure recordings for a stroke (above) and a sham (below) animal.  Greater blood pressure variability is evident in the stroke animal.

An example carotid blood pressure recording is shown in Fig. 1.  Table 1 shows average heart rate and blood pressure group comparisons.  In agreement with our hypothesis, a significant group effect for BPV was found, indicating that stroke was associated with higher BPV than sham animals (P < 0.05) when considered across all frequency bands.  BPV was frequency dependent (P < 0.05), with most spectral power concentrated in the VLF range.  No group x frequency interaction was observed (P = 0.84), indicating that the relationship between BPV and frequency was comparable between groups.

These findings support the hypothesis that an elevation in BPV very early in acute stroke may be an important target for therapeutic intervention.  Moreover, we speculate that cerebrovascular control may also be impaired in these animals, which may further contribute to infarct expansion.  From here we aim to investigate the precise impact that this blood pressure elevation has on morphological indicators of ischaemic brain injury and to develop treatment interventions for BPV attenuation in acute ischaemic stroke.

+ Text Size -
Do NOT follow this link or you will be banned from the site! Original generation time 1.1150 seconds. Cache Loaded in: 1.4447 seconds.