The rodent parasite Nippostrongylus brasiliensis (Travassos, 1914) (Nb) models the salient features of helminth infection including skin penetration, migration from tissues to lung, maturation and egg production in the gut.  Primary infection stimulates host resistance to further reinfection through T helper type 2 (Th2)-mediated immune responses appearing in the skin, lung or gut.  Intriguingly, the Th2 effector mechanisms conferring resistance to Nb reinfection still remain to be fully characterised for the lung, which has been identified as a key site for priming acquired immunity against Nb.  Recently a new player in anti-helminths immunity has been discovered, the ILC2s.  The role of ILC2s in protective immunity against helminths has been extensively studied with gut-associated ILC2s shown to promote the weep and sweep expulsion of helminths from the small intestine, however the role of ILC2s in lung immunity against helminth infection, and more specifically their role in the potentiation of adaptive immunity, is unresolved.

Aim 1.  Determine the role of ILC2s in protective response against N. brasiliensis

We suggest in our grant application using RORa staggerer mice, that are naturally deficient in ILC2s to address this question, unfortunately we were unable to import those mice in New-Zealand due to some MPI problems over the mice being infected with unwanted bacteria in our mouse facility.  We thus used an alternate approach with anti-CD90 antibody treatment in Rag mice, in which protection against Nb was elicited by intraperitoneal administration of IL-2/anti-IL-2 complex.  We successfully depleted the ILC2s with the antibody treatment and show that it did reverse the induced protection (Fig. 1).  From that we concluded that ILC2s are required in this acute model of protection. 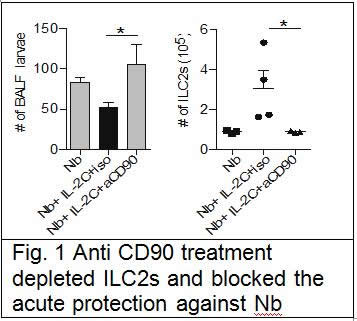 In order to address the role of ILC2s in the context of memory protection against Nb, we depleted CD4 T cells one week before re-infection.  We discovered that CD4 T cells maintained the ILC2s population through an IL-2 dependent mechanism.  Depletion CD4 T cells did reverse the protection against Nb, while ensuring maintenance of ILC2s through supplementation with IL-2/anti-IL-2 complex after CD4 T cells depletion maintain the protection.  This shows that ILC2s are sufficient and required for protection in the lungs during re-infection with Nb.  This work has recently been published in Nature Communications, Bouchery et al, 2015

We have successfully repeated the difference between IL-33 and IL-25 in term of activation potential of ILC2s to protect against Nb infection in the lungs.  We thus tried to focus on understanding the role of IL-33 in this memory protection.  We blocked the IL-33, named ST2 either during the primary infection or during the secondary infection to determine the role of IL-33 in the protective immune response against Nb in the lungs.  Surprisingly our preliminary data showed that in absence of IL-33 signalling during the secondary infection, the protection against reinfection was better than in untreated mice (Fig. 2). 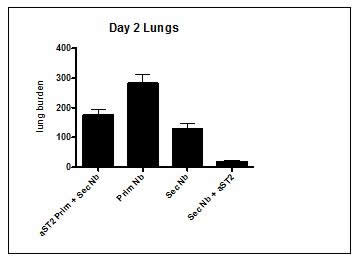 Aim 3.  Characterisation of the activation markers of protective ILC2s

This part of the project is still underway.

+ Text Size -
Do NOT follow this link or you will be banned from the site! Original generation time 0.9960 seconds. Cache Loaded in: 0.0371 seconds.