The colony stimulating factors M-CSF and GM-CSF exert significant influence over the differentiation pathway of the monocyte/macrophages.  Monocyte exposure to M-CSF or GM-CSF is reported to result in the development of resident or inflammatory macrophage phenotypes respectively.  Our earlier data showed that there is a temporal shift in CSF production in vivo where early recruited monocytes are exposed to high levels of M-CSF that is then followed by uptake of GM-CSF.  This pattern of CSF production supports our reported observation that the MSU crystal recruited monocyte/macrophage shifts from a non-inflammatory to hyper-inflammatory phenotype in vivo.

To investigate the inflammatory phenotype of bone marrow-derived M-CSF and GM-CSF generated macrophages following stimulation with the gout-causing agent MSU in vitro.

This work was expanded to investigate the impact of the anti-inflammatory molecule TGFb1, a pivotal cytokine produced during the resolution of a gout attack, affected the M-CSF and GM-CSF macrophage inflammatory responses. 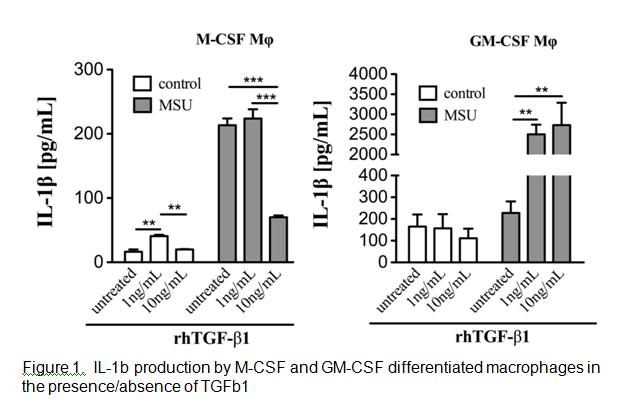